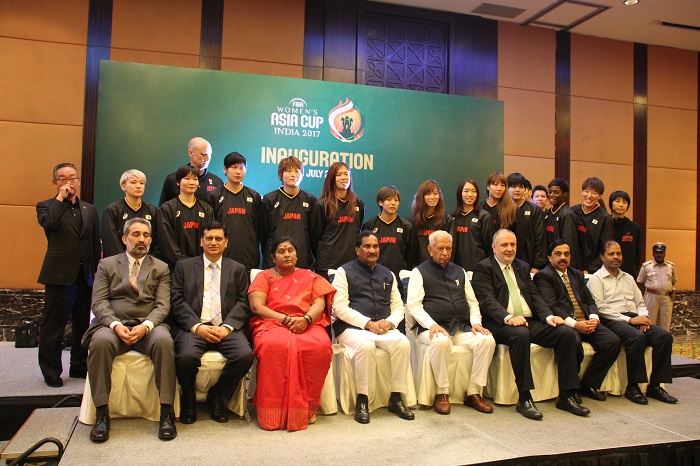 Japanese Women in the Inauguration ceremony

The inauguration ceremony for the FIBA Women’s Asia Cup 2017 took place today at the Ritz – Carlton, Bengaluru, presided by the Governor of Karnataka, Vanjubhai Rudabhai Vala. K Govindaraj, President of the Basketball Federation of India, stressed the importance of the Cup: “The best of Asian talent from 15 nations is in Bengaluru for the FIBA Women’s Asia Cup 2017, which is the first senior level international tournament to be hosted in Karnataka. In fact, this Championship comes back to India for only the second time, after Chennai hosted it way back in 2009.” Mr Hagop Khajirian, the FIBA Regional Director – Asia, also expressed optimism about the future of basketball in India: “Fans in India will witness first-hand the likes of Asami Yoshida, Marianna Tolo, Kim Danbi, Jillian Harmon, Shao Ting and many more. We have a strong belief and hope that hosting the FIBA Women’s Asia Cup 2017 will be a step forward towards increasing the popularity of the game in this sports frenzied nation.” Other invited dignitaries Sri KJ George (Hon’ble Minister for Bangalore Development and Town Planning and Bengaluru District in-charge Minister) and Sri N A Haris (Hon’ble MLA, Shantinagar Constituency). The event was hosted by Smt G Padmavathi, Mayor of Bengaluru. The inauguration ceremony was also witnessed traditional dance performances that showcased the cultural heritage and diversity of India. This officially tips off the Cup, which will be played from 23rd to 29th July 2017 at the Kanteerava Stadium, Bengaluru.