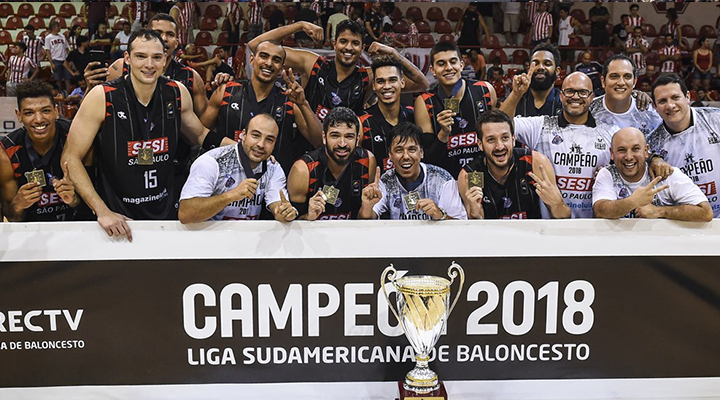 David Jackson was selected as the DIRECTV Liga Sudamericana 2018 MVP after averaging 15.6 points per game.

Andre Goes brought out his personality and scored nine free throws in 10 attempts, in the last 23 seconds of the game, to seal the triumph for the team from Franca.

Goes finished the match with 15 points (11-10 in free throws) and was the third best scorer for Franca, who had a distributed attack with five players in double digits. Lucas Cipolini with 17 points and David Jackson with 16 points, topped the winners' table.

The game was an even duel at all times. The score of the first three quarters prove it: 16-16, 42-38 and 67-67. Instituto tried to impose the rhythm of the hand of the escort Luciano González, who from the bench had 27 points and five three-pointers; However, Franca riposted with its collective game and their main weapon: the three-point shot.

The team from Sao Pablo scored 12 basket from three-point land, in 24 attempts for a very high 50% percent effectiveness.

In the fourth period a key move for the visitors was a double by Cipolini, after an offensive rebound, which put the score in favor of the team 85-81, with only two minutes left. Then the two teams failed consecutive scoring opportunities and with less than 25 seconds left, Instituto resorted to sending the opponent to the free-throw line. Franca stayed focused and scored from the line.

Franca, in addition to raising the Horacio Muratore Cup, also won a spot at the DIRECTV Liga de las Americas 2019, which will begin on January 18.