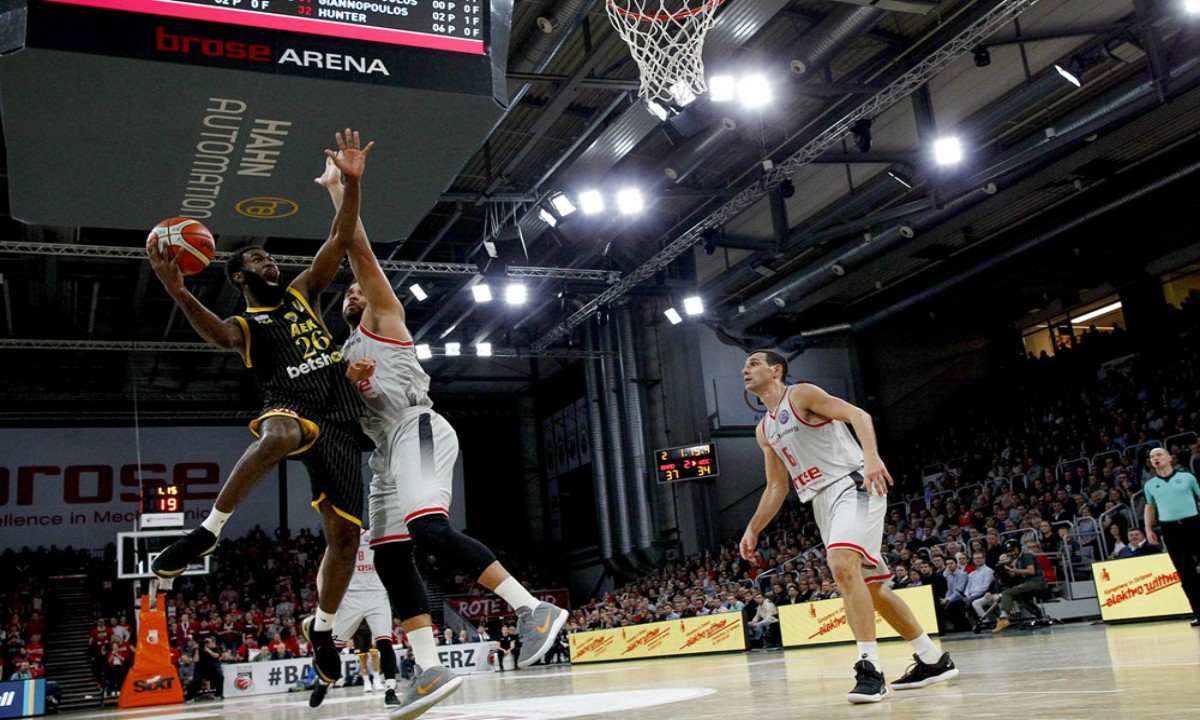 Despite the defeat, AEK - thanks to other results going their way - were able to become the first team assured of a Play-Offs spot with four games remaining.

Here's a round up of all the action:

Sidigas Avellino began the New Year with a 72-62 victory over Anwil to get a stranglehold on second position in Group C.

Avellino, who improved to 7-3, led by as many as 21 after pulling away in the early stages of the game, and managed to shut Anwil out the rest of the way.

For Avellino, Caleb Green had 17, Demetris Nichols 16, Kiefer Sykes 13 points and 6 assists and Ariel Filloy had 12 points, 8 rebounds, 4 assists and 3 steals including a high arching floater in the final minute to put the game out of reach. Patric Young was a force inside on his way to 12 rebounds with his 8 points.

Josip Sobin had 16 points and 7 rebounds to lead Anwil, with Chase Simon the only other player in double digits with 14, as they fell to 4-6.

PAOK jumped UNET Holon in Group B, climbing to third, with a 92-77 victory behind a blazing performance from beyond the arc.

The Greek side went 14-of-21 from beyond the arc, jumping out to a 17-0 lead and would hold a double-digit lead the rest of the way, improving to 6-4.

William Hatcher starred throughout, going 5-of-6 from deep, 9-of-15 overall for 26 points along with 5 assists, Jamal Jones had 13 and Milenko Tepic and Phil Goss had 12 each.

For Holon, Shawn Jones missed a single shot on his way to a 21-point, 11-rebound double-double, whilst Corey Walden had 15 points, 8 rebounds and 8 assists, but it would not be enough.

CEZ Nymburk got past Lietkabelis 78-71  for just their third win of the BCL season but both teams still have their work cut out to get into the Play-Offs spots.

Nymburk are now 3-7, as Lietkabelis also fell to the same record, with both teams sitting in fifth and sixth respectively.

In a game that featured multiple lead changes, Nymburk used a pair of three pointers to make up part of an 8-0 run in the final five minutes to take control for good and seal the win.

Jaromir Bohacik's 20 points led the Czech champs, with Eugene Lawrence the only other player in double figures with 16 points and 5 assists.

Jamar Wilson was the only player to touch double digits for Lietkabelis, with 18 points.

Notable Number: 19 - the number of offensive rebounds Nymburk hauled in, as they won the battle on the glass.

Iberostar Tenerife held on for a 72-66 win over Fribourg Olympic, getting closer to a spot in the Play-Offs as they improved to 9-1 atop of Group B.

It was anything but easy, holding off a plucky Fribourg side who fought back from 10 down in the fourth to make it interesting down the stretch, but Tenerife were able to hold their nerve.

Colton Iverson had 23 points and 11 rebounds, Javier Beiran scored 13 and Pierre-Antoine Gillet finished with 11 for the victors.

Dusan Mladjan led the hosts with 17, whilst Babacar Toure had 13 points and 15 rebounds, and Andre Williamson 10 rebounds in a losing effort.

Notable Number: 40 - the number of points Tenerife scored in the paint, making up for their poor outside shooting.

Brose Bamberg ended AEK's eight game winning streak with a big 77-73 win to take their own streak to four.

Tyrese Rice hit the go-ahead free throws with 42 seconds remaining, and Elias Harris blocked Giannoulis Larentzakis' three point attempt in the dying seconds to snuff out any hope AEK had of a come-from-behind win.

Rice finished with 13 points to lead Bamberg, Augustine Rubit had an efficient 11 points and 9 rebounds, with Ricky Hickman adding 6 assists.

AEK were led by 15 points, 9 rebounds and 5 assists from Dusan Sakota, whilst Vince Hunter went 7-of-10 for his 14 points.

Notable Number: 30 - the number of lead changes that took place, as the game lived up to the billing.

Umana Reyer Venezia put on an offensive clinic in the second half to defeat Opava 102-81, for their seventh win of the season.

Having been down by double digits in the second quarter, Venezia almost matched their total first half output in both the third and fourth quarters, pouring in 65 points in the second half.

Austin Daye had a team-high 20 points on 9-of-14 shooting for Venezia, MarQuez Haynes finished with 17 and 6 assists, with Gasper Vidmar providing support inside on his way to 12 points and 9 rebounds.

Opava were led by 14 from Jakub Sirina.

Venezia are 7-3 in second place in Group B, whilst Opava fell to the bottom of the group at 1-9.

Notable Number: 30 - the number of assists Venezia registered, in one of the top performing team-assist games of the season so far.

JDA Dijon put in a strong defensive performance on their way to a 73-59 win over Montakit Fuenlabrada.

It was a competitive contest until the third quarter, where Dijon held Fuenlabrada to just 3 points, scoring 20 of their own to get a comfortable cushion.

Both teams are now at 3-7 in the group, tied with CEZ Nymburk and Lietkabelis, five games behind AEK with four Gamedays remaining, meaning that the defending champs cannot fall lower than 4th; officially qualifying them for Play-Offs.

David Holston led the balanced attack with 14 points and 5 assists, whilst four other players scored 10 points for Dijon.

Marc Garcia had 13 points to lead Fuenlabrada, and Maurice Kemp grabbed 10 rebounds, but the Spanish side fell to their seventh straight defeat after beginning the season with three wins.

Jason Rich went 10-of-17 on his way to 28 points, as Besiktas improved to 5-5, with Phil Pressey converting on a lay up to give his side a five point cushion with 90 seconds left.

Ivan Buva was the only other Besiktas player in double digits with 12.

Strasbourg got 14 points from Ali Traore, and 11 assists along with 7 rebounds from Mike Green, but they fell to 6-4.

Notable Number: 53.8 - the combined free throw shooting of both teams, as they converted on a woeful 21-of-39.