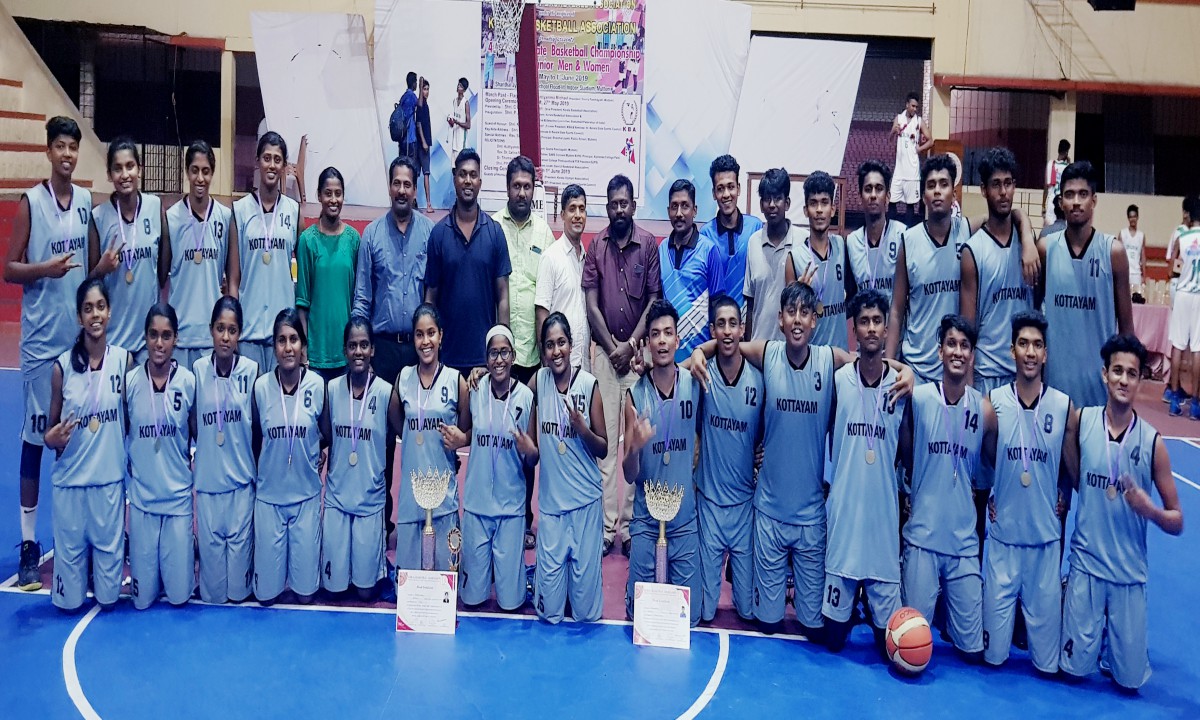 Thodupuzha:   The finals of the 43rd  Edition of Kerala State Junior  Basketball Championship for boys and Girls saw two exciting final clashes both ending in Kottayam teams’ favor. The  girls finals was an electrifying one in which Kottayam, anchored by their International player Ann Mary Zacharia-  who contributed 50 points for her team, defeated Thiruvanthapuram by a score line of 96-95.  The match went for two extra periods after which the winner was decided.

In another thriller, Kottayam beat  host Idukki by a score of 82-67 here  at  the Shanthal Jyothi Public School  Flood lit Indoor Basketball Stadium

Trivandrum girls, inspired by their Senior International player Sreekala R, edged the match initially as they lead 17-12  after the first quarter and ended the interval with a good lead of  44-28.

Trivandrum then continued their domination in the third quarter and lead 57-46 before the final quarter.

Trivandrum started to lose the match committing fouls starting with their semi final star Krishna Priya- the first one to go out with five fouls, followed by  their talismanic player Sreekala R-  who also  was taken off  from the game for committing  five fouls.

Kottayam also suffered a setback when their tall and lanky International Anu Maria committed five fouls and was taken off the game -which forced Ann Maria fight a lone battle  as she contributed 50 points for her team and  helped Kottayam end the regular playing  time with the score tied at 74-74.

The game then went to an extra period which saw the scores tied at   84-84.

The second extra period saw Kottayam taking the championship piping Trivandrum by a scoreline of  96-95  .

Sree Kala was the top scorer for  Trivandrum with 28 Points.

Defending champions Kottayam came to the finals with an unbeaten record  and deservedly  beat Idukki in the final game.

Kottayam, with the help of dominant players from St Ephrems School  started the 1st Quarter leading 22-16. Idukki- the host team fought back in the second quarter and ended up the 1st half with a 2-point deficit (40-38)

The third quarter saw Kottayam increasing their lead through Sajeesh- the top scorer of the Team (30points)  and their international Jerome Prince. The 3rd quarter ended with a lead of 62-38 and  by the final quarter the score read: 82-67 .

In the Semi Final matches, Trivandrum girls beat Thrissur 86-83 and in Boys category Idukki scrape past Kozhikode (62-61) to reach the finals.