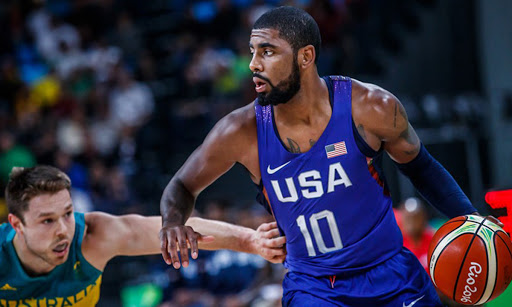 Irving shone from start to finish in the national team jersey during the campaign as they went on an unbeaten run to the title.

In the Final against Serbia, he put on a blistering and jaw-dropping 26-point performance that landed him the MVP award.

Two years later, the 6ft 3in (1.91m) guard was an Olympic gold medal winner in Rio de Janeiro, just months after helping fire the Cleveland Cavaliers to their first and only NBA title just months before.

"WINNING FOR YOUR COUNTRY IS SO UNIQUE, IT IS SUCH A GREAT FEELING TO WIN A TITLE REPRESENTING YOUR COUNTRY."- Irving

Kyrie, what was the feeling like to be named MVP of the FIBA Basketball World Cup in Spain.

It was such an honor and a great achievement to have been picked as the MVP of the FIBA Basketball World Cup in 2014. It's one of the best moments of my career and I really tried my best during that competition. We all had a great tournament and the challenge was so great. We came back home with the gold medal and myself with an individual trophy. Being considered the best player of a World Cup is something important and I was so happy when I knew I was selected to be the MVP of the tournament. The job got done from the first day of the training camp to the last day of the competition; it was a great success for Team USA.

It was also your first major title while playing at senior level with Team USA. What do you remember the most about it?

It was such a great tournament for the team. We played with only one goal in mind: winning the world crown and being on top of the world. We were in 'warrior mode', on a quest to reach the gold medal and every game was played with the same intensity and the same motivation. Despite winning by big margins, we didn’t take anything for granted and we got prepared for every game the same way, as if nothing happened before. The talent and our winning mentality got us to the top of the world, and it was such a moment of joy to climb to the highest step of the podium and get our gold medals. A unique moment! Winning for your country is so unique, it is such a great feeling to win a title representing your country.

Outside of the gold medal, what did you enjoy the most about the competition?

I think the venues and the fans were great. Spain is a great country of sports, and basketball is huge there, so a lot of people came to the games and helped create a very nice atmosphere. We felt a lot of love in Spain, and it was great to share moments with the fans and to discover different places. During an international tournament like the FIBA Basketball World Cup, you feel a great vibe and you discover new players, new teams and you're able to explore a bit the different cities and countries that you can't explore during the season. The whole FIBA Basketball World Cup experience was very interesting, and we all had a good time in Spain, not only by winning the gold medal, but also as we felt a lot of support and love from the fans. That is very good and I'm sure the next tournament in China is going to be as great.

You are only 26 years old, and you have already been a world champion, and an Olympic gold medalist.

Yes but I'm still very ambitious and am always looking for more. Those titles and gold medals are such great achievements, but as you said, I'm only 26 years old and I want to put some more trophies and titles in my personal cabinet (smile). I still have plenty of years to play at the highest level and I would like to try to win more medals and titles with Team USA, and the years to come have so many great competitions happening. The FIBA Basketball World Cup, the Olympics, this is going to be a very intense two years for world basketball with those two great competition coming up. Winning the FIBA World Cup was so great, and winning in Rio 2016 was also a superb moment. I would like to live more of those in my career.

"THE WHOLE FIBA BASKETBALL WORLD CUP EXPERIENCE WAS VERY INTERESTING AND WE ALL HAD A GOOD TIME IN SPAIN... I'M SURE THE NEXT TOURNAMENT IN CHINA IS GOING TO BE AS GREAT."- Irving

There's less than a year to go before the FIBA Basketball World Cup in China.

For the USA, enjoyment can only be had if you win, the standards are so high.

Winning a medal or a title is always a great thing (smile). The feeling when you win a medal or a title is so amazing, it’s something that we work for every day and we always have in our minds. When you play for Team USA, you always work for the best, for the title and to keep the national team on top of the world basketball map. We have been winning a lot of medals and that is in our DNA to always reach for the highest spot and the titles. But to reach that point, you have to keep working hard and not take things for granted. We have a lot of talent, but we always have to keep in mind that we are most of the time the team that everyone wants to beat.

The USA seem to keep getting better but the other countries are making progress, too. Do you think the level of competition for the Americans is going to get higher and higher as time goes by?

Yes and that is so great for basketball. So many players and so many national teams are building competitive ones now, and I really love to see what is happening in the world of basketball. Countries like Canada, Australia for example, have been doing amazing in the last couple of years, and they have so much potential for the next competitions to come. In China, we can expect a lot of great runs from different countries, and a lot of the national teams that are qualified or will qualify for the competition have the potential to reach a medal spot. That is going to be a very intense competition!