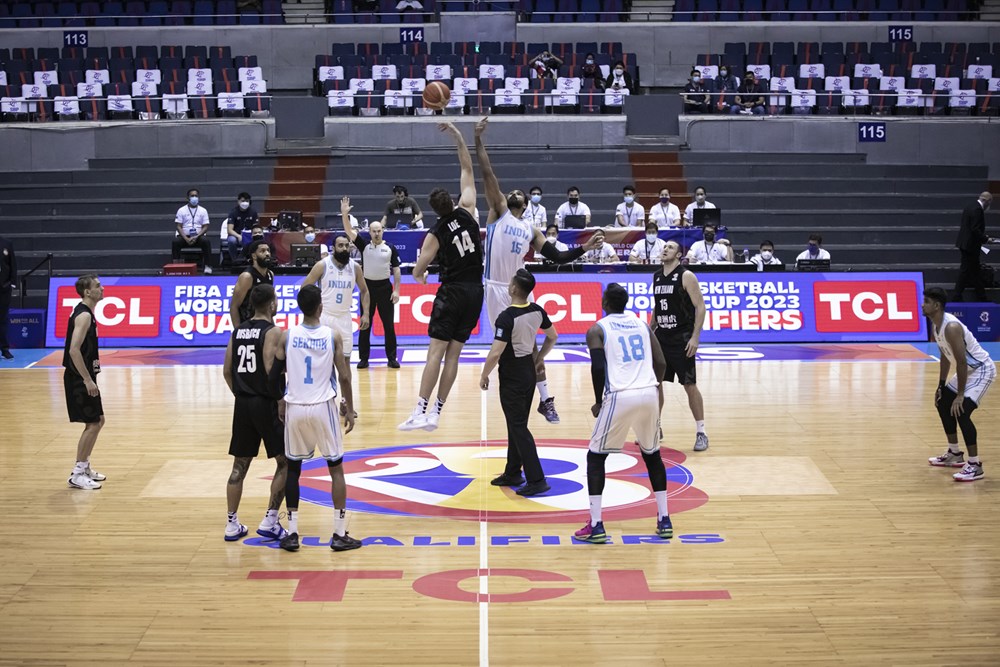 Manila, Friday, 25th Feb 2022: The ‘work-in-progress’ nature of India’s national basketball programs was on full display yet again yesterday in a 46-101 loss to the ‘Tall Blacks’ in the Asian Qualifiers of the 2023 FIBA Basketball World Cup. Ranked 80th in the world, India was expectedly no match for the Kiwis who are currently 27th in global standings. That said, India were guilty of several self-inflicted wounds, which, had it avoided, could have made for a much closer contest. A perplexing decision to start power forward Palpreet Singh in place of regular centre Amritpal Singh saw New Zealand dominate the boards early. This, combined with India’s age old nemesis – turnovers – had the Young Cagers already staring at an 8-32 deficit at the end of the first quarter. Defensively India Head Coach Veselin Matic persisted with a 2-3 zone, which the Tall Blacks had no problems breaking. The islanders enjoyed a 54-34 points in the paint advantage and a 45-25 rebounding advantage. Any basketball analyst will tell you how draining it can be to play catch up. Aided by New Zealand’s own poor outside shooting, India did well to go almost toe to toe in the second quarter. But at half-time the reigning South Asian champs still trailed 25-52. The second half saw Coach Matic field his younger players – Arvind Krishnan (21 y/o), Prashant Rawat (21 y/o), Pranav Prince (18 y/o) and Rajeev Kumar (20 y/o) – for extended minutes. These backups, alongwith Princepal Singh (21 y/o) and starters Sekhon (20 y/o) and Muin Bek (25 y/o), showed a glimpse of what the India’s senior men’s roster could look like in coming years. But while the distant future may hold promise, India continues to post disappointing results in the present. Sahaij Sekhon, an dynamic 6ft 4” point guard from Chandigarh, was Bharat’s only scorer to hit double digits. He also grabbed 5 rebounds and dished out 4 assists, for an overall +11 efficiency. For New Zealand, power forward Tom Vodanovich led all scorers with 21 points while seasoned centre Rob Loe recorded a solid double-double 15 points, 10 rebounds & 6 assists. India next faces hosts Philippines at 3:30pm today. Meanwhile, New Zealand will enjoy an unexpected rest day after the last minute withdrawal of South Korea following one of its players testing positive for COVID prior to departure.